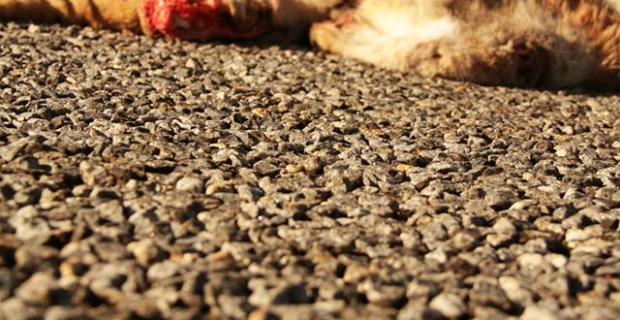 In March I flew with Ramair to Cobar to meet with the team I would be coaching to plan and present the Mt Grenfell ten year anniversary of Handback to the traditional owners – the Ngiyampaa people.

I developed an event management plan with a section detailing every job that would need to be done in the months prior to the event and after a skills audit, a person allocated to each job. Our monthly teleconferences (or Skype sessions) referred to this plan and all went smoothly – mostly because of the deadly team working together to make it happen.

So last weekend, it was time to embark on a road trip accompanied by my artist daughter Daria and friend Sam.

We departed mid morning after grabbing a coffee from 27 Deakin Café in Mildura and headed up the Silver City Highway telling stories accompanied by a music playlist determined by the driver. Arriving in Broken Hill mid afternoon, we crammed a plethora of experiences into an afternoon and night.

Starting with a milkshake at Bells Milk Bar  we crossed the road to browse through the Op Shop where Daria hit pay dirt finding two rolls of old wallpaper featuring dragons breathing fire and robots shooting lasers out of their eyes. Crossing to the other side of the slag heap we checked into The Palace Hotel, where they filmed Priscilla Queen of the Desert. Upon telling a friend where we were staying in Broken Hill, he asked if we were doing the trip on the cheap. My reply was in the negative to his question and in the positive for how much I like staying in this quirky hotel with its legendary murals. Where an added bonus these days is the restaurant which on a Thursday night was packed and quite rightly so as the food and wine list were terrific.

But before dinner we squeezed in a few other experiences including what I consider to be one of the best regional shoe shops in Australian, Sampsons Shoes where we tried things on but figured we didn’t really need any new shoes.

Sam then sneaked us into the Trades Hall building on the Corner of Blende St and Sulphide Streets to look at the amazing interior but upon seeing the curve in the ceiling, I played around with the acoustics with a few songs including Panus Angelicus by Cesar Franck. The sound was amazing, not particularly my singing, more the reverberations making it sound like a number of singers were involved. We snuck out a bit embarrassed when we realised there was a meeting going on in a nearby room. Next up was a short drive out the Tibaburra Road to check out a mural created during an event we produced at St Pats Raceway  in 2010, the National Indigenous Land and Sea Management Conference. The team was headed up by renowned and respected artist Badger Bates who worked with a team of talented Broken Hill artists on the 20 metre long mural which happily still was in great condition portraying the 40,000 year history of Broken Hill.

About an hour before sunset, we took a 12 kilometre drive out west to the Living Desert Sculpture Park a place I’ve visited many times and loved. As I w alked around the sculptures created in 1993 by artists from around the world, I thought about how art contributes to peace and understanding and how much had changed since the works were unveiled. Especially to artists such as Dr Mahomad Mira from Syria and how things were for him lately and Badri Salushia from Tbilsi, Georgia who couldn’t communicate with his family during the creation of his work due to the war in Azerbaijan at the time and another artist who’s child died back in his country during the time he was in Australia working on his sculpture, which remained unfinished as he rushed home upon hearing the dreadful news.

As the sun dropped over the horizon so did the winter temperature so we cranked up the heater in the car and headed back to town. On the way we noticed a strange noise every time we braked, sort of a ‘gal..oop’ that we all thought sounded like trapped water. We stopped and I got out of the passenger seat and walked with the car as the driver continuously braked and we listened intently for the noise which appeared to come from inside the passenger door, or behind the glove box. I check under the bonnet but nothing appeared to moving that wasn’t supposed to be.

After we ate a fabulous meal in the Palace Restaurant, we asked reception for a mechanics number so we could check the strange ‘trapped water’ ‘gal…oop’ noise in the morning as we continued our 1600 kilometre round trip.

Phil Grosso the mechanic was very helpful driving/braking listening for the noise eventually getting out of the car to check under the driver’s seat, whereupon I followed his lead and checked under the passenger seat. First I pulled out a bottle of red wine destined to be shared with my friend overnight on Sunday then imagine my utter embarrassment (as a farmer’s daughter) to pull out a large water that as I yanked it made a ‘gal…oop’ sound.

I shoved the bottle of wine into the mechanics hand thanking him and we all dove into the car  reeling at how dumb we were and took off like it was a getaway car. Standard joke for the rest of the trip made mock serious  fun of any action that involved a noise eg. pushing back the sun visor  “What’s that noise?” “It sounds kinda like a sun visor hitting the ceiling of the car, what the hell do you think it is?” Kind of set the tone for the trip!

We headed west towards the Mt Grenfell Historic Site, 40 km east of Cobar. We started off with the ‘singalong’ playlist (think Total Eclipse of the Heart, Pink Floyd’s Comfortably Numb, Prince’s 8 minute version of Purple Rain and Michael Franti’s Say Hey I Love you”) and avoiding the incredible amount of roadkill (picture). The highlight was stopping the car to watch three wedge tail eagles cruising above waiting for us to leave so they could get back to the dead emu they had been tearing apart.

We finally arrived at Mt Grenfell just after the sunset. We walked through the camp meeting all the people I had been working with over the past few months then set up camp next door to a group of new friends. What happens next is covered in the next blog – Space Junk and Handback Happiness.